Are you looking for best decks in clash Royale to participate in Clash Royale league 5 days event? Here are we rated some decks and strategies which will help you to get 20 wins and to be drafted in pro league team. Some of the players are managed to win already by using these decks and strategies. Your cards will affect on your wins the more cards you have more chances with utilizing decks to get you win more.  You should participate in regular matches before going into challenges. 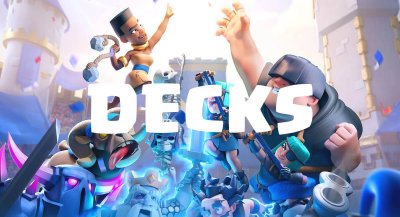 Hog cycle is one of the best deck for any 2.9 player the player can easily win trophies by using this deck. The trick to know your enemy cards and make a good defense your main goal to be hog+Spell. Keep in mind not to break over-committing you might get loose towers. That’s not a big deal to defend but once musketeer dies you will be dead automatically. Use skeletons to defend Musketeer.

This deck is known for defense in couple ways you can use and play with this deck play a pseudo bait style and other one is to playing with a defensive support. Keep using your cards until you get know your enemy cards. In most cases, you should be defensive when your opponent put pressure on an x-bow in the opposite lane. Make sure you always not be over-commenting when you defending your x-bow.

Against Pekka, Royal Giant would be able to protect you from blade, And against Golem Royal Giant will work same like against X-Bow.

Hog Rider will make difficulty in matchup batter to protect your furnace so they will back their hog. Do not use your lightning until you can attack these 3: Hog, Musketeer, Ice Golem.

If your opponent drops push of Hog Rider or Battle Ram, you can easily defend by using Mega Minion. If your opponent use its push with Ice Golem you should defend your tower instead of taking the enemy tower.

When every deck is not working against your opponent push you should use Musketeers to defend against enemy attack.  Once you got your elixir full place Musketeer in front of the river. After placing musketeer you will get relief then start throwing spells at the enemy tower.

You can’t deny this is one of the best decks in Clash Royale league. You could be suffering from different situations like if your opponent is continue investing on pushing and you left minimum defending units. It’s the right time to use your Pekka against their tank. Like in every deck you shouldn’t be over-committing and be defensive until you get the opportunity. 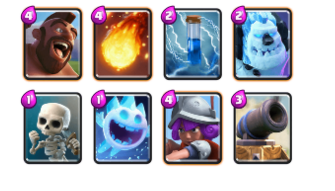 This deck used to work on handling the pressure control cycle. This deck has not much stronger for defense but oriented in more spam cards. Always look into your Musketeer don’t let it die. It’s your main DPS which can sit middle of arena.

Ram Rider is capable of versatile cards will be able to protect larger and make good offense. You can defend yourself and make a good damage to your opponent tower with Ram Rider.

Bait deck has crossed almost 2 years in all forms. Its main feature is to defend large units and baiting short spells. But this deck wouldn’t be able to defend when enemy makes a big push.

But the valuable thing in this deck to not over-committing. You may get difficulty while closing out game with this deck.