There is a lot of talking going in Clash of Clans community about TH13 and the final update of 2019. End of the year update is usually huge and players believe this one would be big too. A part of Clash of Clans community believes that Town Hall 13 is just around the corner while the other half disagrees. Recent October was not that big content-wise. There was nothing much added just some quality of life change.

As of my Clash of Clans experience, I believe TH13 shouldn't take much longer. It should be coming in the Christmas update. Darian said in his recent interview, "In this end of the year update, there are quite a few surprises. Several things that people have been asking for a very long time. I know this is being very very vague and because we are still in the early developmental stages of that update". 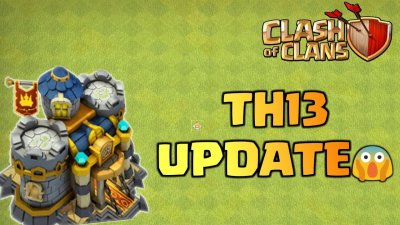 As by the "serveral things players been asking for" I take it as a new town hall and a new hero. TH13 would be weaponized too just like TH12. I think it will have a more "robotic" theme. It could be a grey robotic like something with walls of the matching color. Let us know what you think about the new town hall in comments.

Darian also said in the interview, "We are still kind of solidifying a lot of those details. We have a
roadmap of what we want to include in this update. There will be a lot of content for endgame players. One of the main things we want to tackle endgame is what to do when you have maxed out resources".

This makes me think that there is going to be some game-changing content for those who are sitting at TH12 with everything maxed out. Clash of Clans gonna bring something to keep you busy at your maxed out town hall. I can't be sure what it would be and I have no idea how it will work. I have seen a lot of players asking, " Hey, I am maxed out now, what is gonna keep me interested? When do I get new content?"

Problem is that Clash of Clans developers can't release something major in every update, so TH12 players keep waiting for months to get some new content. Even when they get the new content, they usually max it out in a week because of the amount of magic items, resources, and gems they have stacked up. Developers are looking at a permanent solution to keep those players interested and to keep then playing.

I like the idea how the game was recently sped up for higher town hall levels but I also believe that TH12 should be much slower. In the past, it used to take us years to reach TH10. TH10 was the max town hall back then. Since then a lot of things have changed. The game has become much more complex but I truly liked those simpler days.

Christmas update is to bring new skins for all the heroes. Maybe a Santa King or something like that. Clash of Clans developers are also working on new special effects for the skins of heroes like Archer Queen shooting colored arrows according to her skin. A bunch of new tweaks is to be added to the game in the near future.

Will the troops get 3D render in the future update?

Darian was asked if the troops will get the 3D render in the upcoming update, he replied, "if we did do it, it would be for a long while larger because you know they are so small that I mean if you are gonna play fully zoomed there might be some value to it but when you play from such a distance there is a very little visual merit and converting them to 3d. On top of that device, it has to run on are older devices so 3d models are rather taxing on system resources. I don't see us doing skins for troops in the near future."

There is a lot of talk going on in Clash Community about the new hero. Most probably it is going to be a female hero because we already have two male heroes so gender equality you know. It could be the princess from Clash Royale though it is just a possibility. I just used that as an example I don't think that's actually going to be it. The cool thing is I have no idea about the new hero all I know that it is coming for sure in Christmas update. Maybe we can get some leaks in the future as there is enough Clash of Clans fans who keep leaking stuff from time to time.

The new hero is going to open a lot of new possibilities for new strategies. Four heroes and their right deployment is going to be the key to winning the attacks. Of course with the addition of new heroes, there is going to be a bunch of new defenses too. The new hero can be a thing for TH13.

With the addition of new town hall, new troops are also important to bring it down. As Supercell games keep exchanging troops, I think the new troops can be from Clash Royale or maybe even from Brawl Stars. New troops open new possibilities and new strategies and METAs. That's all for today. Throw your views in the comment section. Let us know what you think about Christmas updates. We will be writing more as soon as we hear something about the new update. Clash
on!